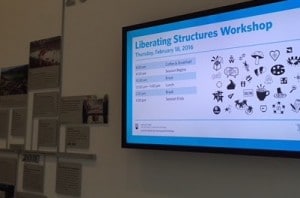 The agenda for one of the days of the Liberating Structures workshop, outside the room.

Fast forward a couple of months and I was receiving emails about the Liberating Structures workshop being offered at UBC. I just had to get in on the action. Add to my facilitators toolbox with new processes and methods, while geeking out with other facilitators in the room? Sign me up.

This is what it looks like when 100 people get into an experiential learning room.

The workshop took place at the beautiful new Robert H. Lee Alumni Centre on the UBC campus, with about 100 people in attendance. I had known the group was going to be this big and I was curious to see how the facilitating “ensemble” (about seven people) was going to work with this size of a group. We participated in a lot of the structures (not all) over the 2 1/2 days. It was wonderful how we were able to work together – in pairs, quartets and small and large groups – to avoid small talk and get right to meaningful discussion via the structures.

The one thing I was a little disappointed in was that we never got to practice actually facilitating any structures during the workshop. I guess I’m used to attending facilitation workshops that ask us to facilitate, not just to be a participant, and so this was a bit of a miss for me. By the third day I found myself choosing to leave the open space-like activities that were going on to find a corner to sit in and brainstorm with flipchart paper and markers. I craved starting to create lesson plans which used the structures, to translate the experience of learning about them into certain action using them after I left the workshop.

One of the things that I really appreciated during the workshop was the openness of the facilitators to be a part of their facilitation debriefs. At the end of every day the facilitators invited anyone who wished to stay after the workshop ended to watch them talk about how the day went in a “fishbowl”. I had never seen this kind of open invitation from workshop facilitators before and I loved the vulnerability of it all. In fact, I loved the practice so much that I’m going to do the same thing next week as part of an online course I’m co-facilitating on online facilitation skills. (Myself and my co-facilitator are going to put ourselves in the fishbowl first, debriefing our facilitation of our course so far.) Next time I facilitate the Instructional Skills Workshop, I’d like to use this practice as well.

The facilitation ensemble in the fishbowl at the end of the first day.

It’s now time for me to dive more deeply into the text, “The Surprising Power of Liberating Structures”, that I was given at the workshop, and continue lesson planning for a couple of other events that I have coming up – both face to face and online. Here’s an example:  a local organization has asked me to come in and “present” on workplace learning strategies but – surprise, surprise – I’m going to use some Liberating Structures with them instead. I have a feeling that they want me to be “the expert” about this topic, but my plan is to help them realize that, hey, we all are. These kinds of structures will hopefully help us to get there.

This site uses Akismet to reduce spam. Learn how your comment data is processed. 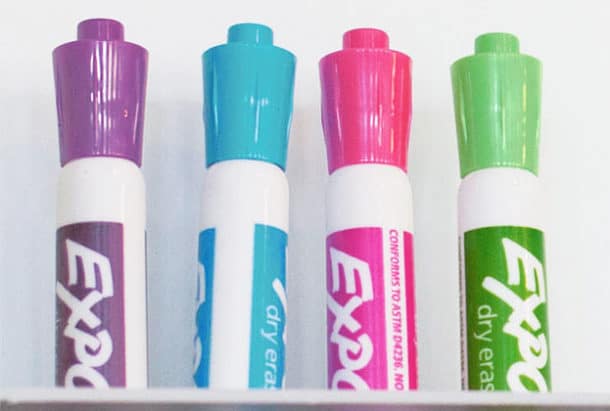 Sign up for the latest articles and to find out about new courses, workshops & offerings.

Check your inbox for the link!

Join Waitlist We will inform you if a space becomes available in this session. Please leave your valid email address below.